Wherein we are treated to the grubby spectacle of one tenth-rate wannabe circlemaker poking fun at another for no apparent reason or benefit to either party – or anybody else – that I can fathom. And not just that but providing enough clues that the identity of that person becomes obvious to those who know how to read them.

At least, I assume the Spiderman referred to is the bogus one of Circlemaker TV infamy and not the real Spiderman of crop circle history. I’m reminded of that scene in The Dark Knight where the genuine Batman is confronted by a fake Batman who labours under the delusion that if he dresses like Batman and does what Batman does, that somehow makes them equal. It doesn’t. But some people will never understand the simple truth of these things, no matter how hard it gets beaten into them.

Do I detect a hint of jealousy here? This formation is leagues ahead of anything the shoddy Team DC can muster.

Picking flaws in a masterful work such as this, when all one can manage is shabby hoaxes that look like they had all of two minutes thought put into them, merely makes one look like an idiot.

RACCF demonstrates the utter lack of any depth of thought informing their alleged “research”.

You know it’s been less a lean year and more of a famine when The Crop Circle Connector are already hailing this as one of the most impressive formations of the season. 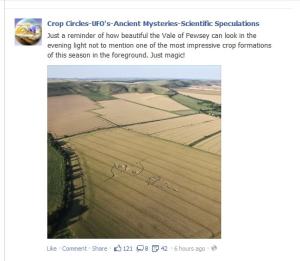